The Courage to Be Disliked by Ichiro Kishimi and Fumitake Koga 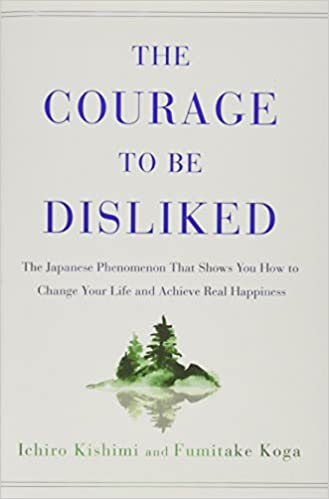 This is an important book and confirms much of the ancient wisdom teachings, including the possibility of change, practice, interconnectedness, and freedom.

The Courage to Be Disliked summary

This is my book summary of The Courage to Be Disliked by Ichiro Kishimi and Fumitake Koga. My summary and notes include the key lessons and most important insights from the book.

How to Live Without Being Controlled by the Past

Are You Okay Just As You Are?

People Always Choose Not to Change

Your Life is Decided Here and Now

The Second Night: All Problems Are Interpersonal Relationship Problems

Why You Dislike Yourself

All Problems Are Interpersonal Relationship Problems

Feelings of Inferiority Are Subjective Assumptions

An Inferiority Complex Is an Excuse

Braggarts Have Feelings of Inferiority

Life Is Not a Competition

You’re the Only One Worrying About Your Appearance

From Power Struggle to Revenge

Admitting Fault Is Not Defeat

Overcoming the Tasks That Face You In Life

Don’t Fall for the “Life-Lie”

Do Not Live to Satisfy the Expectations of Others

How to Separate Tasks

How to Rid Yourself of Interpersonal Relationship Problems

Desire for Recognition Makes You Unfree

What Real Freedom Is

The Fourth Night: Where the Center of the World Is

The Goal of Interpersonal Relationships Is a Feeling of Community

You Are Not The Center of the World

Listen to the Voice of a Larger Community

Do Not Rebuke or Praise

Exist In the Present

People Cannot Make Proper Use of Self

The Fifth Night: To Live in Earnest in the Here and Now

The Difference Between Trust and Confidence

The Essence of Work Is a Contribution to the Common Good

Young People Walk Ahead of Adults

You Can Be Happy Now

The Courage to Be Normal

Life Is a Series of Moments

Shine a Light on the Here and Now

Give Meaning to Seemingly Meaningless Life