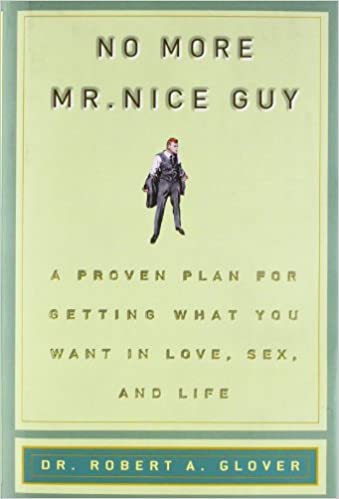 The single best book on the Nice Guy Syndrome from the guy who invented the term.

Dr. Glover explains what it is, how it came to be and provides forty-six exercises to help Nice Guys break free.

If you are a nice guy or think you may be, I highly recommend reading this book and doing the exercises.

If you like spirituality, The Road Less Traveled is uniquely insightful and thought-provoking. Or if you've ever contemplated the ceaseless nature of change, Who Moved My Cheese offers a simple yet powerful parable to relate to this phenomenon with greater wisdom.

Who Are These Men?

Nice Guys frequently state that it makes them feel good to give to others.

What’s Wrong With Being a Nice Guy?

The term nice guy is actually a misnomer because Nice Guys are often anything but nice.  Here are some not-so-nice traits of Nice Guys:

An integrated mail possesses many of the following attributes:

Over the last several years, I have watched countless men "do something different "by applying the principles contained in this book.

Chapter 2  The Making Of A Nice Guy

Whenever a child experiences any kind of abandonment he will always believe that he is the cause of what has happened to him.

As a result of these abandonment experiences and the faulty interpretation of these events, all children develop survival mechanisms to help them do three very important things:

The Origin Of The Nice Guy Paradigm

The Baby Boom Generation And The Sensitive Guy

To truly understand the current phenomena of the Nice Guy Syndrome, we have to take into account a series of significant social changes that began around the turn of the century an accelerated phone World War II. These social dynamics included:

These social changes crated three profound dynamics that contributed to the widespread phenomena of the Nice Guy Syndrome in the baby boom generation.

The Habits Of Highly Ineffective Men

Nice Guys prevent themselves from getting what they want in life and love by:

Chapter 3  Learn to Please Yourself

How Nice Guys Use Attachments

Seeking The Approval Of Women

The Nice Guy’s need to hide is often the most pronounced in areas that are just part of being human and alive.

Nice Guys find many creative ways to cover up their perceived flaws and mistakes.

Affirming Self Helps Nice Guys Learn to Approve Of Themselves

Revealing Self Helps Nice Guys Learn To Approve Of Themselves

Chapter 4  Make Your Needs A Priority

A Paradigm Of Powerlessness

Take A Walk On The Wild Side

Nice Guys Tend To Be Disconnected From Other Men

Nice Guys Tend To Be Disconnected From Their Masculinity

Nice Guys Tend To Be Monogamous To Their Mothers

Nice Guys Tend To Seek The Approval Of Women

Breaking The Monogamous Bond To Mom

Chapter 7  Get The Love You Want:  Success Strategies For Intimate Relationships

Setting Boundaries Helps Nice Guys Get The Love They Want

Focusing On Their Relationship, Not Their Partner Helps Nice Guys Get The Love They Want

This doesn't mean searching for the perfect partner, just one who is already taking responsibility for her own life. Over time, the members of life no more Mr. nice guy groups have come up with a number of traits to consciously look for when creating new relationships.

Doing something different also means refraining from being sexual in new relationships. Sex creates such a powerful bond that it is difficult to accurately evaluate the appropriateness of a new relationship.

Chapter 8  Get The Sex You Want:  Success Strategies For Satisfying Sex

The problems are manifested in many ways:

Good sex consists of two people taking full responsibility for meeting their own needs. Good sex occurs when two people focus on their own pleasure, passion, and arousal, and stay connected to those same things in their partner.

Chapter 9  Get The Life You Want:  Discover Your Passion And Purpose In Life, Work, And Career

If there were no limits on your life:

Nice Guys On The Job

Fear Prevents Nice Guys From Getting The Life They Want

Self-Sabotage Prevents Nice Guys From Getting The Life They Want

Deprivation Thinking Prevents Nice Guys From Getting The Life They Want

Realizing Your Passion and Potential

Remember, what one man can do another man can do.

Unfortunately, the world can’t give us something that we’re not ready to receive.  Since deprivation thinking keeps a person holding tightly to what he already has, there is no receptivity for receiving more.

Get The Life You Want:  The No More Mr. Nice Guy Strategy For Success

Codependent No More; How to Stop Controlling Others and Start Caring For Yourself by Melody Beattie
Written primarily from the prospective [sic] of alcoholic family systems, this early book on codependency applies to both men and women.

Iron John by Robert Bly
Bly uses myth and poetry to focus on the ways men are wounded in modern cultures.

Out of the Shadows; Understanding Sexual Addiction by Patrick Carnes, Ph.D.
A leading expert on sexual addiction, Carnes’s books cover issues of personal addiction and traumatic bonds in relationship.

Wild at Heart; Discovering The Secret Of A Man’s Soul by John Eldridge
Eldridge explores how Christian men are conditioned to be “nice” and how this robs them of their true masculine selves.

The Myth Of Male Power by Warren Farrell
A former president of the New York Chapter of NOW, Farrell has written numerous books on men’s issues and relationships.

The Wonder of Boys by Michael Gurian
Gurian addresses the unique qualities and characteristics of boys and adolescent males in his books.

Feel The Fear And Do It Anyway by Susan Jeffers, Ph.D.
The founder of Fear Busters, Jeffers’s book is a readable and powerful prescription for facing and overcoming fear.

Nice Guys Don’t Get Laid by Marcus Pierce Melton, Jr.
A humorous look at why Nice Guys have difficulty in their personal and sexual relationships.

The Road Less Traveled by M. Scott Peck, M.D.
In one of the best selling self-help books of all time, Peck addresses issues of discipline, love and spirituality.

Camile Paglia
An historian and observer of modern culture, Paglia frequently touches on issues of personal and sexual relationship dynamics.

Neil Scott
A pioneer in identifying, explaining and treating the Nice Guy Syndrome, especially as this phenomenon pertains to single men and their relationships with women.  He offers an audio titled, The Nice Guy and Why He Always Fails With Women.