On Writing Well by William Zinsser 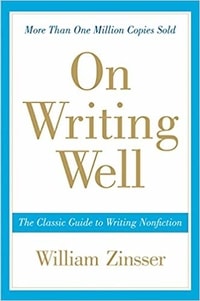 In-depth coverage of the mechanics and methods of great nonfiction writing, the different types - business, travel, interviewing, etc - and attitudes like voice, confidence, and overcoming fear.

If you are interested in fiction writing, On Writing is as brilliant as it is hilarious.

9 The Lead and the Ending

WRITING IS NOT A CONTEST

GO WITH YOUR INTERESTS

12 Writing About People:  The Interview

13 Writing About Places:  The Travel Article

14 Writing About Yourself:  The Memoir

16 Business Writing:  Writing in Your Job

18 Writing About the Arts:  Critics and Columnists

20 The Sound of Your Voice

22 The Tyranny of the Final Product

25 Write as Well as You Can