Who Moved My Cheese by Spencer Johnson 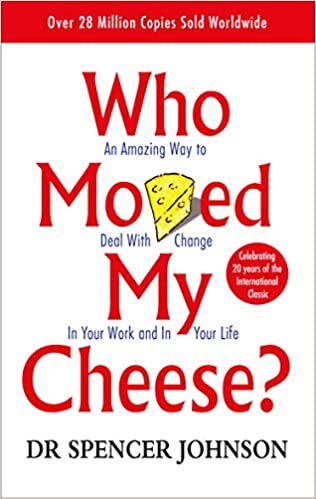 A short book with a timeless message: adapt to inevitable change.

Written as a parable, the book highlights how we resist change and make the simple complicated through emotions and excessive thinking.

If you like this book, you will appreciate The Road Less Traveled, a classic NYT bestseller on spirituality written in layman's terms.

PARTS OF ALL OF US

The Simple and the Complex

The four imaginary characters depicted in this story — the mice:  “Sniff” and “Scurry,” and the littlepeople:  “Hem” and “Haw — are intended to represent the simple and the complex parts of ourselves, regardless of our age, gender, race, or nationality.

Sometimes we act like
Sniff
Who sniffs out charge early, or
Scurry
Who scurries into action, or
Hem
Who denies and resists change as he fears it will lead to something worse, or
Haw
Who learns to adapt in time when he sees changing leads to something better!

Whatever parts of us we choose to use, we all share something in common:  a need to find our way in the maze and succeed in changing times.

The Story Behind the Story
by Kenneth Blanchard, Ph.D.

Who Moved My Cheese? is a story about change that takes place in a Maze where four amusing characters look for “Cheese” — cheese being a metaphor for what we want to have in life, whether it is for a job, a relationship, money, a big house, freedom, health, recognition, spiritual peace, or even an activity like jogging or golf.

Each of us has our own idea of what Cheese is, and we pursue it because we believe it makes us happy. If we get it, we often become attached to it. And if we lose it, or it’s taken away, it can be traumatic.

Living in constant white water with the changes occurring all the time at work or in life can be stressful, unless people have a way of looking at change that helps them understand it.  Enter the cheese story.

In The Story you will see that the two mice do better when they are faced with change because they keep things simple, while the two littlepeople’s complex brains and human emotions complicate things.  It is not that mice are smarter.  We all know people who are more intelligent than mice.

As you watch what the four characters do, and realize both the mice and the littlepeople represent parts of ourselves — the simple and the complex — you can see it would be to our advantage to do the simple things that work when things change.

The Story of Who Moved My Cheese?

“Having Cheese Makes You Happy.”

“The More Important Your Cheese Is To You The More You Want To Hold On To It.”

“If You Do Not Change, You Can Become Extinct.”

“What Would You Do If You Weren’t Afraid?”

“Smell The Cheese Often So You Know When It Is Getting Old.”

“Movement In A New Direction Helps You Find New Cheese.”

“When You Move Beyond Your Fear, You Feel Free.”

“Imagining Myself Enjoying New Cheese Even Before I Find It, Leads Me To It.”

“The Quicker You Let Go Of Old Cheese, The Sooner You Find New Cheese.”

“I don’t think I would like New Cheese. It’s not what I’m used to. I want my own Cheese back and I’m not going to change until I get what I want.”

“It Is Safer To Search In The Maze Than Remain In A Cheeseless Situation.”

“Old Beliefs Do Not Lead You To New Cheese.”

“When You See That You Can Find And Enjoy New Cheese, You Change Course.”

THE HANDWRITING ON THE WALL

They Keep Moving The Cheese

Get Ready For The Cheese To Move

The Quicker You Let Go Of Old Cheese, The Sooner You Can Enjoy New Cheese

Move With The Cheese

Savor The Adventure And
Enjoy The Tase Of New Change

Be Ready To Change Quickly
And Enjoy It Again & Again

They Keep Moving The Cheese

“Move With The Cheese And Enjoy It!”