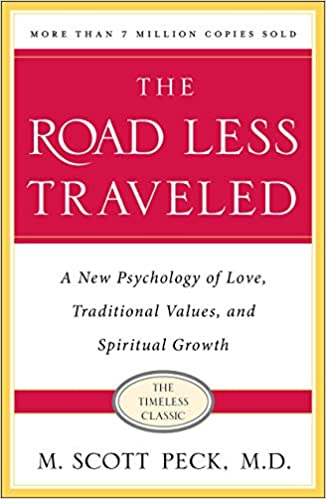 For anyone interested in spiritual growth, this is the first book I would recommend.

If you prefer self improvement, The 7 Habits of Highly Effective People is an exceptional book.

This Book is broken into 4 sections.
I:  Discipline
II:  Love
III:  Growth and Religion
IV:  Grace

The one constant I find, however, whether it be in the Northeast, the South, the Midwest or the West, is the relative lack of, and thirst for, community.

The Healthiness of Depression

The Myth of Romantic Love

Love Is Not a Feeling

The Work of Attention

The Risk of Commitment

The Risk of Confrontation

The Mystery of Love

The Religion of Science

The Baby and the Bath Water

The Definition of Grace

The Miracle of Evolution

The Nature of Power