One Up On Wall Street by Peter Lynch 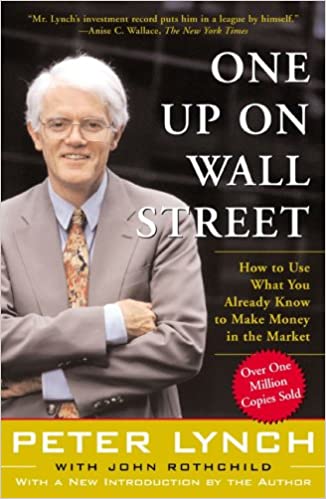 One of the all-time best investment guides and one of my favorites. A normal person can pick stock just as well, if not better, that the average Wall Street expert. Investing in stocks is an art, not a science, and success is determined not by the stock market or the companies you pick but the investor himself / herself.

One Up On Wall Street summary

This is my book summary of One Up On Wall Street by Peter Lynch. My summary and notes include the key lessons and most important insights from the book.

Introduction: The Advantages of Dumb Money

Part I: Preparing to Invest

Chapter One: The Making of a Stockpicker

Chapter Three: Is This Gambling, or What?

(3) Do I Have the Personal Qualities It Takes to Succeed?

What I hope you’ll remember most from this section are the following points:

Chapter Eight: The Perfect Stock, What a Deal!

(1) It Sounds Dull—or, Even Better, Ridiculous

(2) It Does Something Dull

(3) It Does Something Disagreeable

(5) The Institutions Don’t Own It, and the Analysts Don’t Follow It

(6) The Rumors Abound: It’s Involved with Toxic Waste and/or the Mafia

(7) There’s Something Depressing About It

(10) People Have to Keep Buying It

(12) The Insiders Are Buyers

(13) The Company Is Buying Back Shares

Beware the Next Something

Beware the Stock With the Exciting Name

Chapter Twelve: Getting the Facts

Here are some pointers from this section:

(1) If you are looking for tenbaggers, the more stocks your own the more likely that one of them will become a tenbagger.

Chapter Seventeen: The Best Time to Buy and Sell

When to Really Sell

If It’s Gone Down This Much Already, It Can’t Go Much Lower

You Can Always Tell When a Stock’s Hit Bottom

If It’s Got This High Already, How Can It Possibly Go Higher?

Eventually They Always Come Back

It’s Always Darkest before the Dawn

What Me Worry? Conservative Stocks Don’t Fluctuate Much

It’s Taking Too Long for Anything to Ever Happen

Look at All the Money I’ve Lost: I Didn’t Buy it!

I Missed That One, I’ll Catch the Next One

Chapter Twenty: 50,000 Frenchmen Can Be Wrong

If you take anything with you at all from this last section, I hope you remember the following:

Epilogue: Caught with My Pants Up