The 22 Immutable Laws of Marketing by Al Ries & Jack Trout 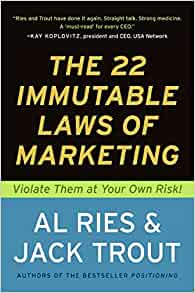 One of the best books about marketing by two of the most influential marketers.

The 22 Immutable Laws of Marketing summary

This is my book summary of The 22 Immutable Laws of Marketing by Al Ries & Jack Trout. My summary and notes include the key lessons and most important insights from the book.

‍We have been studying what works in marketing and what doesn't for more than 25 years…programs that work are almost always in tune with some fundamental force in the marketplace.

1: The Law of Leadership

It’s better to be first than it is to be better.

2: The Law of Category

If you can't be first in a category, set up a new category you can be first in.

4: The Law of Perception

Marketing is not a Battle of products, it's a battle of perceptions.

The most powerful concept in marketing is owning a word in the prospect’s mind.

6:  The Law of Exclusivity

Two companies cannot own the same word in the prospect’s mind.

7: The Law of the Ladder

The strategy to use depends on which rung you occupy on the ladder.

8: The Law of Duality

In the long run, every market becomes a two- horse race.

If you’re shooting for second place, your strategy is determined by the leader.

Over time, a category will divide and become two or more categories.

11: The Law of Perspective

12: The Law of Line Extension

There’s an irresistible pressure to extend the equity of the brand.

13: The Law of Sacrifice

You have to give up something in order to get something.

14: The Law of Attributes

For every attribute, there is an opposite, effective attribute.

When you admit a negative, the prospect will give you a positive.

16: The Law of Singularity

In each situation, only one move will produce substantial results.

17: The Law of Unpredictability

Unless you write your competitors’ plans, you can't predict the future.

Success often leads to arrogance, and arrogance to failure.

Failure is to be expected and accepted.

The situation is often the opposite of the way it appears in the press.

21: The Law of Acceleration

Successful programs are not built on fads, they're built on trends.

22: The Law of Resources

Without adequate funding an idea won't get off the ground.

Have patience. The immutable laws of marketing will help you achieve success. And success is the best revenge of all.